The original church on this site was probably 12th century, but the present building, which is of perpendicular style, is mainly of late 14th or early 15th century date. The east wall may represent a surviving element of the earlier building. At its apex is a 17th century sundial. The north transept is 16th century.

The 66ft high tower, in three stages with carved quatrefoils, houses a clock and 5 bells and is topped with battlements & pinnacles. On the west side is a broken figure of Christ on the cross, surrounded by angels. The tower was rebuilt after being blown down in 1309 and again 600 years later after lightning struck. The earliest bell is dated 1582 and the heaviest weighs 25cwt. It is believed that a 6th bell was taken to yeovil to pay a debt. The clock is dated 1837 and was made by John Baker of South Petherton.

Link to a list of past vicars (opens a PDF file)

The nave and south porch are embattled with gargoyles. The south porch roof is dated 1685 and there are 2 scratch dials on the north east buttress.

(We are extremely upset to report that, in July 2017, the lead from the south porch was stolen and have lost the commemorative imprints on the lead as shown below)

St. Mary’s is remarkable for its Jacobean oak pews with shell tops, all differently carved, and some benches have carved names & dates , some as far back as the 17th century. The pulpit, also Jacobean, has a stone base replacing the original wood (dry rot!); the stone was taken from old tombs when the churchyard was levelled. Nearby is the base of an old rood screen (removed at the Reformation).  The choir stalls are formed from portions of the rood screen.

The 15th Century stone font, carved with Somerset lilies, stands where the old coke stove was - electrical heating was installed in the pews in 1957 when the church was decorated.

Eric Sparks, while organist and the woodwork master at Yeovil School, built the wooden screen door to the vestry and carved the wooden lectern. Eric also made the offertory box in memory of Harrison Jackson.

Look outside on the South East wall of the Sanctuary for the blocked small window at eye level. This was originally a leper’s window or SQUINT, allowing lepers to watch the mass being celebrated.

On the north wall, over the font, a board informs us that in 1617 William Whitbye and his wife Annis were buried in the Churchyard (a table tomb) bequeathing £5 per year forever to the poor of the parish (still distributed).

On the northwest wall a plaque commemorates Joseph John Beauchamp Palmer, vicar from 1921-42 and another commemorates The Reverend Douglas White, Vicar from 1949-1998. On the south wall is a list of vicars from 1239, proving that a church existed here then. Mudford was mentioned in the Domesday Survey of 1086.

In the east end of the church, the window depicts Jesus giving His blessing to the world, flanked by St Martin & St George. This was given by the parents of Cyril Walter Bown of the Manor House, Mudford, killed in action in 1917.

Also in the east end (sanctuary) is a brass alms dish given to the church in 1944 by London children evacuated to Mudford during World War II.

Beside the organ (north wall) are memorials to the Mudford parishioners killed in the two World Wars. 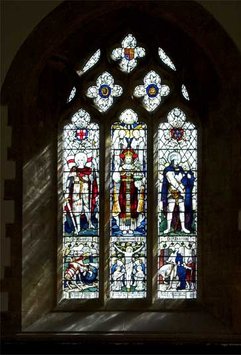